‘the ownership of a property is a secondary consideration to the fact that it is empty’ (Post-War Squatters, cited in Watson, 2016, p. 101),

Despite promises that the free market can allocate resources fairly and efficiently according to principle of supply and demand, ensuring that each get what they need (but most importantly, ‘deserve’); the reduction in social housing and spending on socialized provisions of shelter has been disastrous. What has alternatively been called ‘warehousing’ or ‘land banking’ also points to the problem of buildings being purposefully kept empty (often by transnational speculators), with a mind on increasing returns on investments (e.g. social cleansing and gentrification by those able to pay higher rents) or as a pretext to ‘regenerate’ (i.e. demolish and build something more lucrative).

Below is an initial attempt to juxtapose this disparity between increasing numbers of people without a secure home and the increasing number of empty buildings in England (especially London) using a selection of statistics on both home-less people and people-less homes. I hope to update this as and when new data emerges, possibly turning this into an annual or quarterly report.

‘There is no national figure for how many people are homeless across the UK. This is because homelessness is recorded differently in each nation, and because many people do not show up in official statistics at all’ – Crisis

In December 2015 the UK Statistics Authority published an assessment of compliance with the Code of Practice for Official Statistics in relation to DCLG’s homelessness and rough sleeping statistics, finding that the Homelessness Prevention and Relief statistics “do not currently meet the standard to be National Statistics.”

While it would be meaningless to ‘sum up’ these totals to come up with an overall number, there have been some estimates at the total number of homeless in the UK and where (if current trends continue) we could be headed.

Shelter reported in The Guardian (Nov 2017) that 1 in every 200 people in the UK are ‘homeless’ (with 1 in 59 in London, and 1 in 27 in Newham alone). They estimated 307,000 people were currently sleeping rough or in inadequate housing (an increase of 13,000 in a year, a crisis costing the taxpayer £1bn) adding that this was likely an under-estimate in that it didn’t capture hidden homelessness. The leading cause of recorded homelessness was the ending of private tenancies (1 in every 10 cases) which are triggered by soaring rents and cuts to housing support budgets. On current trends, Shelter estimate that more than a million households are at risk of becoming homeless by 2020.

An analysis commissioned by Crisis with Heriot-Watt University also made similarly dramatic claims in August 2017 (The Guardian) when they argued that homelessness in Britain could double by 2041. Without governmental intervention, the study argued that 575,000 people could have no access to shelter, while numbers of rough sleepers could quadruple to 40,100 in the same period. The biggest rise, they suggest, will be for those placed by a council in unsuitable accommodations (such as B&Bs) with the total expected to rise from 19,300 to 117,500. The report concludes that a 60% increase in new housing could reduce levels of homelessness by 19% by 2036, while increased prevention work could reduce levels by 34%.

Local authorities have responded with concerns that they don’t have the funding to cope, at a time when housing shortages, rising rents, and cuts are increasing pressure on their housing departments. For the shadow housing secretary, John Healey, it was clear that ‘this is a direct result of decisions made by Conservative ministers: a steep drop in investment for affordable homes, crude cuts to housing benefit, reduced funding for homelessness services and a refusal to help private renters’ (The Guardian).

Due to apply from April 2018, the Homeless Reduction Act will create a statutory duty for local authorities to actively take steps to prevent and relieve households at risk of homelessness from tipping into crisis, allocating £61m for 2017/18 and 2018/19 to address the issue. The DCLG also plans to step-up its data collection of homeless populations, including more detail on support needs, reasons for becoming homeless, length of time in temporary accommodation, and the outcomes of each prevention case.

This act, however, comes into force in the context of calls from Simon Dudley (Conservative leader of Windsor and Maidenhead Council) to use powers conferred by the Vagrancy Act 1824 and the Anti-Social Behavior Crime and Policing Act 2014 to clear Windsor of homeless people in time for the royal wedding of Prince Harry and Meghan Markle on 19th May. The Vagrancy Laws – which were brought in to clear Britain’s cities of homeless war veterans after the Napoleonic wars and were originally punishable by 1-month hard labour – frame sleeping rough or begging a criminal offence, and therefore mirror modern attempts by councils to fine homeless persons for sleeping rough, as well as the anti-squatting provisions of the Legal Aid, Sentencing and Punishment of Offenders Act 2012 which criminalized squatting in any residential building.

There are around 221 UK charities (49 in London) which focus on helping vulnerable groups in general, or on specific areas such as night shelters or emergency accommodation. According to the Charity Aid Foundation (CAF) UK overview of charitable giving in April 2017, a total of £9.7 billion had been donated by Brits in 2016, with medical research being the cause that people were most likely to donate to (26%). Donating to homeless people, housing, and refuge shelters was not in the top 5 causes, but took around 15% of donations each month (seeing a high of 22% of donations in December). Young people were more likely to give to physical and mental health charities (24% vs. 16% over 65s); homeless people, housing, and refuge shelters (21% vs. 14%) and educational institutions (5% vs 2%), whereas the eldest group were most likely to give to hospitals and hospices; overseas aid and disaster relief; and religious organisations.

Homeless people, housing, and refuge shelter charities received 6% of the total donations in 2016 (6% of £9.7bn = £582m). It should also be noted, however, that donations only make up one source of incomes for charities. According to a 2012 article on Britain’s top 1000 charities, for instance, The Salvation Army had a total income of £144.7m, while Shelter registered £51.1m). A further article in November 2017 suggested that 19p out of every £1 donated in the UK goes to just 13 charities, with the top 10 being: Save the Children International; British Council; Nuffield Health; Cancer Research UK; Charity Aid Foundation; National Trust; Arts Council England; Oxfam GB; Save the Children UK; and the Wellcome Trust.

An ethical and political point can be made by simply juxtaposing Britain’s People-less homes with numbers of homeless people, directly undermining the notion that the market alone can allocate evenly and fairly, whilst supporting the idea of greater state intervention (rather than cuts) to support vulnerable groups find shelter, space, and homes. We can approach ‘People-less homes’ using three frames: (1) land ownership; (2) vacant commercial properties; (3) empty residential properties.

Central London is particularly interesting, in that the Crown, the Church, and just five aristocratic estates (with a collective wealth of £22bn) have inherited over 1000 acres of central London’s super-prime real estate, in addition to newer estates and offshore investors.

2. Vacant Commercial Buildings
Since the LASPO Act 2012 outlawed squatting in residential buildings, commercial properties have become more and more a target for those seeking shelter, protest, or alternative space. Its perhaps not surprising then, that FOI requests are often met with cagey responses from local authorities, who cite concerns over ‘theft’ in order not to reveal all empty commercial properties in order to avoid flagging up potential squatting destinations.

While there are 27,000 new homes currently being build in London in each year, it is estimated that 50,000 are needed just to keep up with demand. According to the think tank Policy Exchange (reported in The Telegraph, Feb 2016) empty commercial buildings in London alone could provide 420,000 homes for rent, in addition to 500 hectares of empty or under-utilised industrial land across London (around 750 football pitches). Advocating a public-private approach, they argue that if the government committed £3.1bn to purchase this land (alongside the private sector) then they could build 21,000 houses a year (arguing that these should be designed for the private rented and shared ownership sectors, so that the government could recoup its money within 20 years from renting).

Currently, developers are still pushing ahead with creating new office space, despite concerns of a post-Brexit exodus of business from the country. There has also been criticism of current powers which allow local authorities to convert offices in order to provide homes without providing anything ‘affordable’. Since 2015, as part of an attempt to improve housing supply, some 30,575 housing units in England have been converted from offices to flats without having to go through the planning system. Last year (2016), it was also revealed that Barnet council was planning to transform offices into 254 flats which would be 40% smaller than Travelodge bedrooms (deemed ‘dog kennels’ by critics). According to Martin Tett (Local Government Association), such permitted development – which bypasses the accountability of council planning – ‘is detrimental to the ability of local communities to share the area they live in’ while ‘the resulting loss of office space can risk hampering local plans to grow economies and attract new businesses and jobs to high streets and town centres.’ 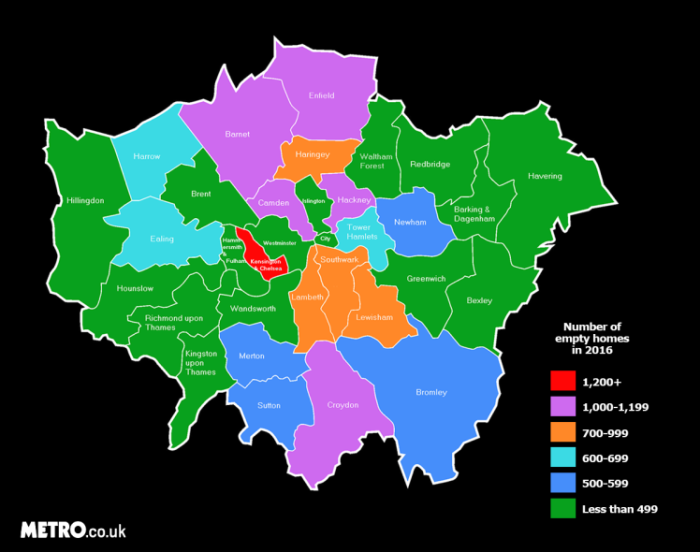 While the colours on this map are misleading (with ‘green’ still indicating a large number of ‘less than 499’ empty properties!); it nevertheless shows the spread of 19,845 London homes which have been empty for over 6 months in 2016. The highest number are in Kensington and Chelsea (the borough in which many were made homeless by the Grenfell Tower fire and also where the number of long-term vacants has risen by 25% in a decade).

While the Property Partner analysis (using figures from DCLG) estimated 19,845 long-term vacant dwellings (i.e. over 6 months) in London; they also approximated ten times that number (200,145) across the UK. While the number of long-term empty homes has dropped since 2006 (36.4%), the estimated value of empty property in England nevertheless stands at £43.5 billion.

“Some of these [empty homes] may not stay empty (if they are on the market, or are being renovated). But others are stuck empty, perhaps because of inheritance issues or because their owners are holding on to the property hoping for a rise in its value before selling it.” – Empty Homes Charity.

Despite stamp duty changes to try and address ‘buy to leave’, the practice seems to be continuing. Kensington and Chelsea is a hot-spot for such property deals, where wealthy investors can purchase properties as investments and leave them empty as their value increases. Both the Evening Standard and the Guardian have dubbed the borough a “ghost town” in recent years due to this practice. Whilst in neighboring Westminster, an FOI request in 2013 found that just 19 of the 80 luxury apartments in One Hyde Park (at one point the most expensive real estate in the country) were occupied, with the rest left empty or used as second homes.

Often the trouble is foreign capital parking their investment in a city where they know they can get a quick return on their investment. A recent Transparency International Report found that less than a quarter of homes built in 14 recent London developments were sold to UK buyers, while every flat sold so far in the redevelopment of Heygate Estate in South London has gone to foreign investors. Five years since completion, none of the ten £50m super-luxury apartments in the Qatari-owned Shard have been sold.